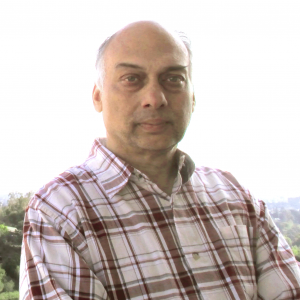 Imagination of the Unthought Within the Thought of our Times

Sri Aurobindo, 1872-1950, was a philosopher, nationalist, mystic, poet and yogi. Although most of his prodigious writings revolve around the practice of Yoga and India’s philosophical traditions, between 1916-1918 he turned his attention to the subject of the evolution of human society. Sri Aurobindo has been a real inspiration to me personally. Although his writings might seem archaic and even quasi-religious at times, his integral yoga is in fact highly contemporary and relevant to our times. It is not a path of transcendence, but rather sees matter and spirit as inseparable, rationality as a stage in transit to a spiritual or suprarationality, and the goal as the transformation of life on earth in all its dimensions. In his work, The Human Cycle The ideal of Human Unity, War and Self-Determination, he wrote:

Man's road to spiritual supermanhood will be open when he declares boldly that all he has yet developed, including the intellect of which he is so rightly and yet so vainly proud, are now no longer sufficient for him, and that to uncase, discover, set free this greater Light within shall be henceforward his pervading preoccupation. Then will his philosophy, art, science, ethics, social existence, vital pursuits be no longer an exercise of mind and life, done for themselves, carried in a circle, but a means for the discovery of a greater Truth behind mind and life and for the bringing of its power into our human existence. We shall be on the right road to become ourselves, to find our true law of perfection, to live our true satisfied existence in our real being and divine nature.

Debashish Banerjee's essay below is a contemporary expression and improvisation of the integral thinking, intuitive mind, and evolutionary spirit of Sri Aurobindo.

Debashish Banerjee is the Haridas Chaudhuri Professor of Indian Philosophies and Cultures, Doshi Professor of Asian Art, and Dept. Chair, East-West Psychology at the California Institute of Integral Studies (CIIS). He is a student and experimental researcher of the paradoxical integral thought and posthuman-making praxeology of Sri Aurobindo and the Mother. (Steve Brett)

Our imagination operates, to start with, within epistemic bounds. This means there is an unthought to our thought which we take for granted, just as a fish may imagine different forms of ocean life but not a life on land, unless it either finds its experience extended by circumstance to include land or its imagination receives a jolt (or bolt of lightning) that pushes it out of its epistemic shell to a new quantum of perception. Yet such things do happen and the pioneers who imagine from such out-of-the-box conditions begin to give us new ideals and new epistemes along which to imagine.

In the formation of a collective around such new epistemes, there may rise a new institution and the fossilization of the episteme over time into a police state establishing the episteme as a moral imperative and form of conditioning. This kills the imagination from which it began and the imagination which it might have engendered and/or opened. On the other hand, the question is, can a collective be formed which refuses such an external institutional fixation but maintains a fluid and plural imaginary ethos through practices of creativity that interpret the epistemic imagination that it holds as an ideal. An ethos pervades a collective culturally but refuses rituals of confession whether based in formal or informal institutions or formations. For this it also refuses ideology formation and terminological or semiotic coding and replaces these with expressions of unique interpretation as the currency of intersubjective interchange and transindividual becoming.

That given, the first condition of such an ethos which liberates the imagination for ontogenesis is the replacement of an ideal of having by one of being and becoming. Primarily an ethos of being instead of having is to stabilize the perception of self-contentment – one needs nothing to be happy. A praxis of the reversal of the will is needed to reabsorb the habits of tying one’s happiness to one’s wanting, which is the appropriated libidinal economy of the fixated society. The nomos of this society in our times is world capital. This reclamation of the will and the appropriated eros requires a systematic praxical method, which Michel Foucault has called a technology of the self but which may equally be called yoga. Secondly, based on this change of internal ethos from having to being there can arise a revised exercise of the will to becoming-other than what one is in the image of the imagined ideal, which is an open goal directed by the idea one may have opened to by imagination of the unthought in the thought.

To start with, the reality of any other is not clear to us yet it is a hidden potential within us. The will to becoming is a relational process of self-transformation or metamorphosis. The invisible ideal from the outside magnetizes our faculties to individuate collectively in its embodiment. This is true in the individual as a collective of parts and faculties and the collective as an individual of individuals. Whether at the level of the element (part, faculty) or the individual or collective the will to becoming the invisible attractor is unique in each case. Yet what connects them to each higher assemblage is a common imagined ideal which is the transindividual integrating them all. Such a transindividual cannot be “named” or “known” until integrally experienced.

In our times, the collective attractor of such an ideal is the vanishing point that may be called the plane of immanence, whose philosophical definition is the identity of radical plurality and absolute unity. This must be experienced uniquely in a plurality that goes all the way down and transindividuates towards the open whole of the plane of immanence which lives always already and uniquely in each element. Working together in a polis of the future that supports an ethos and interpretation forming unique individual and collective becomings towards the embodiment of such a transindividual is the imagination of the unthought within the thought of our times.

This essay was previously published in Imaginezine.com

Thanks to Oscar Murillo for the image of his work, disrupted frequencies.