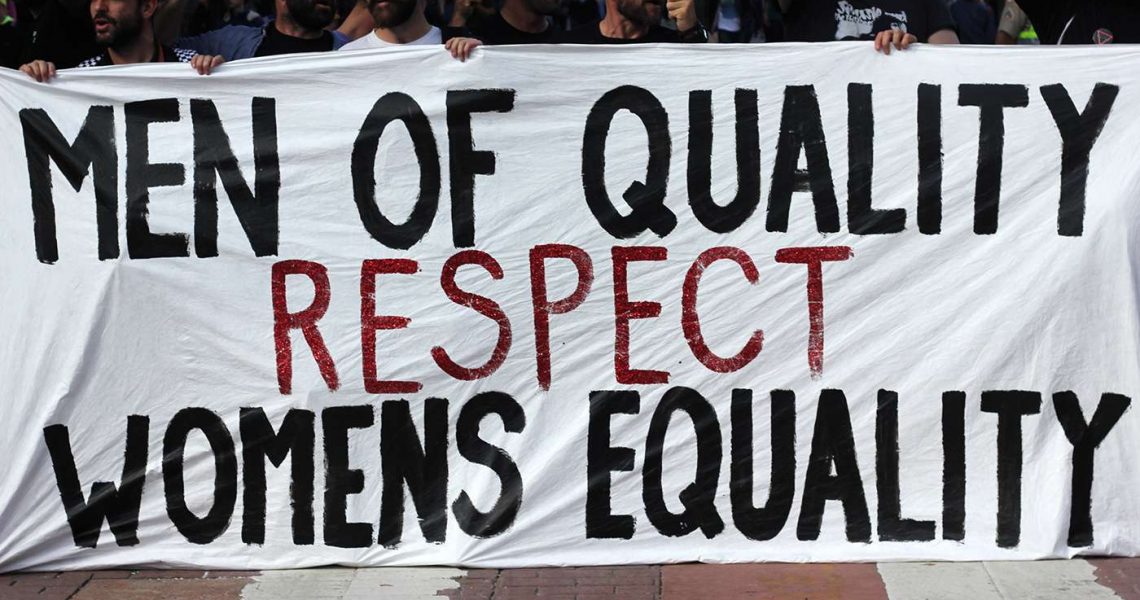 This essay looks specifically at the unresolved issue of gender relations, and its cross-cultural intersections as highlighted by the #MeToo movement.

Many are attempting to understand the threads that underpin and link the complex challenges we face today. A passion to find ways to respond, to reconsider how we do things, that is not merely cosmetic or simply applies to a privileged few, is re-focusing thinkers and activists alike.

On the one hand, the world is becoming more intimate with itself as a whole, on the other, deep-rooted fissures related to class, race, gender, political and religious world views appear to have intensified under the spotlight of global attention – in some cases carving deeper chasms between us. Where do we look for potential solutions that go beyond outcomes defined by winners and losers, or that simply reverse dominant/subordinate hierarchies? How do we avoid mistaking sophisticated models that are intellectually satisfying, but abstract, for reality? How do we address schisms imbued with the weight of unresolved history? More specifically, what is needed to evolve deeply conditioned cultural beliefs without being tempted to reach for some kind of premature transcendent synthesis?

And in terms of the ways we think, a further host of questions present themselves: how can we avoid the trap of binaries and yet refrain from adopting careless jargon that attributes “binary thinking” to any challenging polarity? Common descriptors such as ‘blaming and shaming’, ‘victim and transgressor’ can over-simplify the framing of complex issues, diminishing responsibility and/or minimalizing behaviours.  How do we facilitate an open and honest examination of internal cultural structures, passed down through generations, still powerfully imprinting themselves on the present?

Barely 16 months ago, the world witnessed a sea-change in the West. It was one that blind-sided our sense of cultural identity as liberal and progressive — as being a ‘world’ where sexual freedom, gender-fluidity, the rights of women and the LGBTQ community no longer create headlines (at least in mainstream media). However, as explosive allegations of serial sexual abuse mounted against celebrated Hollywood producer, Harvey Weinstein, activist and actress, Alyssa Milano, sent out a tweet — two simple words — #MeToo*.  A movement of unprecedented solidarity, not seen since the 60’s, was born.

The tweet went viral instantly, triggering an outpouring from women ‘coming out’ with their own personal experiences of sexual violence. As numbers spiralled exponentially, the West’s stature of having achieved gender equality went up in flames. The phenomenon of abuse of power and sexual predation crossed lines of class, race, and socio economic status. Neither wealth nor fame provided a barrier. This breaching of a veritable wall of silence resulted in swift, and previously unthinkable, consequences. Men, whose reputations, wealth and vast networks imbued them with an aura of invincibility, toppled like dominoes from the heights of Hollywood’s powerful elite. Whether through choice or persuasion, positions of leadership and influence were hastily vacated across the industry. And deep pockets, customarily sufficient for muffling, if not erasing, bruising allegations of crimes or serious misdemeanours, proved ineffectual. In the glaring spotlight of multiplying testimonies, no amount of money, no individual payoffs, or the hiring of expensive defence lawyers, could buy silence.

The fact that women, not just one woman, broke from the ranks of glittering wealth and success, where complicity has long been entangled with ambition and fear, encouraged others to break their own silence. Farmworkers, along with women employed in the service industries, were reinvigorated to demand the end to notorious sexual harassment and inequitable pay. Almost overnight the ‘nod and wink’ culture, existing under the false pretext of being innocuous, was no longer nodding and winking.

As a woman, the experience during those early months was that finally woman was being listened to, our stories taken seriously; and for the first time, a culture of accountability conceivable. Some women, and men, even envisioned out of the rubble of rage, grief and humiliation, a culture of We-Two, shimmering on the horizon.

A little over a year later, we find ourselves amidst the complexity unleashed by this social eruption. Change is occurring as a result of that now iconic tweet. Awareness of gender inequities has been resuscitated and anti-discriminatory policies reinvigorated within institutions known to harbour sexist attitudes and practices.  Cultural behemoths such as the BBC, formerly protected from scrutiny by their stature, have been forced to reveal discrepancies in gender pay grades. At varying levels, attempts are being made to catch up with progressive social consciousness, even the law itself.

The New York Times suffered the public embarrassment of having to rectify 167 years of disproportionately recording the celebrated lives of men (predominantly white) over a negligible representation of comparable women in its obituaries section. In London, within 24 hours of an undercover exposure by the Financial Times, the prestigious President’s Club shut itself down. A stinging report of debasing sexual harassment of young hostesses, by its wealthy male-only clientele, marked the demise of this annual luxury charitable gala. In the USA, a third of more than 1,000 executives surveyed, said they had adjusted their behaviours regarding sexual harassment*.

The recent launch by Gillette* of an advertisement uninhibitedly carrying an anti–sexist message for men and boys, exposed a cultural raw nerve.

Gender issues are systemic and global but the impact of #MeToo, despite its detractors, is visible in large and small ways. At a time when critical events of global significance, barely make 24 hours in the news cycle, there are signs that the message within #MeToo is entering mainstream culture. Unsurprisingly these are plagued with controversy.

The eruption on social media ranged from dismissal, at what was perceived by some liberals as paper-thin integrity coming from a company known for portraying rugged masculinity; to indignation at being ‘told’ how to be a man; to rageful rants alleging the advertisement was a  “postmodern project to neuter men by depicting masculinity itself as toxic”. The conflation of behaviour(s) with masculinity itself raises deeper questions concerning gender identity. However, the scale of response seems only to underscore some of the key issues behind the #MeToo movement. The sensitivity to commonplace behaviours and attitudes being raised to a threshold of cultural recognition, and intimating the need for change, would appear to speak to a level of denial.  Any departure from mainstream messaging concerning gender, like that of Gillette, is still rare. And how far the turbulent debates generated as a result will go in effecting real change is as yet unknown. But until men feel an active sense of responsibility, alongside women, to consciously change the deeper constructs within our collective psyches, the potential of We-Too will remain elusive.

Still another important element that could equally jeopardize the potential of radical change, is the weaponization of #MeToo. Mixed motives and agendas attach themselves to any social revolutionary movement. And both women and men are equally capable of exploiting a transitional moment. Unsubstantiated allegations of sexual abuse, picked up by scurrilous media outlets seeking sensationalist sales, have been, and are, devastating to an innocent person’s reputation, personal life, family and career.  When this occurs, it’s clearly imperative that women are among the first to step forward to openly condemn it. Similarly, it’s critical that neither men, nor women, conflate the actions of an individual woman with the movement itself. Just as the actions of an individual man, or group of men, do not represent ‘men’. Reverting to binary gender divisions, posed as inherently oppositional, would be a regressive outcome.

If we want to truly develop new forms of ‘We-two’, as demonstrated by progressive spiritual/cultural think tanks experimenting with ‘We Spaces’ beyond gender identification, it’s important not to lose sight of the wider context of the #MeToo movement. No matter how entangled the motivations and emotions unleashed in the aftermath of Alano’s tweet, we cannot afford to minimalize the scale or cultural implications of what was, and continues to be, revealed. #MeToo’s very existence stems from the stark, dark reality that engrained structures of patriarchal power, gross and subtle, still permeate life in the 21st century — as much in the West as anywhere. And despite a well-documented history of abuse, in too many places in the world, this is considered ‘normal’.

With over seventy accusations of sexual assault and rape, Weinstein was finally arrested in May 2018. At the time Milano tweeted “Today a man whose actions were so egregious that they spawned a global reckoning has been taken into custody.”

Milano’s statement could be perceived as an example of Western centrism. Perhaps more accurately, #MeToo has unveiled the myth of gender equality as a fait accompli for humanity, as yet. Despite a long history of ambiguity, in the West, in how our cherished principles of Liberty, Fraternity and Equality applied to women, the eruption of feminist consciousness in the 60’s definitively changed things. So perhaps what has shaken Western culture so deeply with the #MeToo phenomenon, is the sheer magnitude it exposed of an issue we felt we had largely put behind us. As a collective voice speaking truth to power, #MeToo has become a touchstone for solidarity, and yet it stands alongside other global movements in challenging a culture of violence perpetrated by men against women, simply because they could.

Except for glimpses into rare egalitarian cultures, past and present, we don’t yet know the potential of a truly We-two relationship between the genders. Erasing, essentializing, or transcending differences — real or perceived — is surely not the point. #MeToo, with all its imperfections, is proving to be a critical step on the thorny path to achieving an authentic partnership between truly self-actualized men, women, and LGBTQ.

*The term “Me Too” was first coined by Tarana Burke, an African American civil rights activist in 2006, to raise awareness of the pervasiveness of sexual abuse and assault in American society.

*Gillette, a brand of men’s and women’s shaving and personal grooming products, owned by the multinational corporation, Proctor and Gamble (P&G).